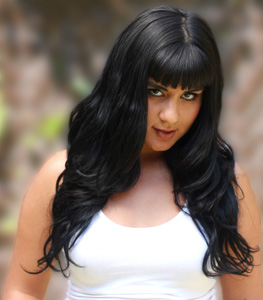 NR came by the studio with a friend on the day of our appointment, and the three of us got to talking so much that we almost forgot to get on with the shooting.  That is to say that chatting with NR is a lot of fun.  Shooting her is a pleasure as well.

As you can see, NR's tattoos are nerd-bait - she's got not one, but two Batman tattoos, the MK3 dragon on her back, Freddy's claws on her side... the list goes on.  Hearing her rattle off the Mortal Kombat games she owns and realizing that she both knows the franchise better and owns more games than I do was a little humbling, to say the least, especially considering that she's 10 years younger than I am.

BRANDED: When did you get your lower back tattoo?

BRANDED: and where'd you get it?

BRANDED: K. What city and State?

NR: Yuma, Azrizona. I think that the Amy Winehouse song had just come out 'cause it was playing on the radio, 'You Know I'm No Good.'  I still remember that. He actually put on the stencil backwards twice and then started on it.

NR: So two times my friends caught it, she's like, 'Why does that say namtab?' She's, she's going to look at it in the mirror and be like, 'oh, it looks good.'

BRANDED: Do you get comments on your tattoos in general? Like, do people talk to you about them?

NR: Sometimes. When my shirt rises up a little bit sometimes it does. I had a lady at a flea market - this little,  nice little Mexican lady, but really loud. Like I was reaching to get condiments at like, at somewhere and she ran across and like lifted my shirt up and everybody was staring and I was like 'oh my god, this is so like, uncomfortable.'

BRANDED: She undressed you in public?

NR: Yes. She just starts picking or 'come show my daughter, come show this.' I'm like 'no, I'm just trying to eat.'