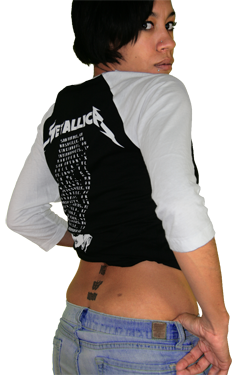 I had shot SS years before for another project, so when I worked out the concept for this one, she was one of my first calls.  After scheduling difficulties and a couple of legs of rock n roll touring, we finally got together in my studio to shoot, and came up with some pretty good stuff.

I think it was largely because we'd shot together before and I knew her comfort level and her style, so we managed to get some good shots, despite my continued inexperience with this project.  I started branching out from the two or three shots I had been doing and toyed with some new looks, some of which I still use today.

BRANDED: And water you said was part of a bigger tattoo thing you were having done, the four elements? Okay, cool. How do you feel about the phrase tramp stamp?

BRANDED: Tattoos in general? Or lower back?